CfR 4/2018/1 To significantly contribute to the development of the EU post 2020 Biodiversity Strategy and the success of its implementation by, inter alia, ensuring the policy relevance of the ALTER-Net conference sessions and maximise uptake of its outputs.

A call for a European collective movement to halt biodiversity loss

For more information on the whole process, contact us at: post2020biodiversity@eklipse-mechanism.eu

The current EU Biodiversity Strategy to 2020 will soon come to an end. Its aim is “to halt the loss of biodiversity and improve the state of Europe’s species, habitats, Ecosystems and the services they provide, while stepping up the EU’s contribution to averting global biodiversity loss” (EU Commission, 2011).

The mid-term review of the EU Biodiversity Strategy to 2020 by the EEA describes poor progress made in implementing the actions and achieving the six targets set out in the strategy. The report demonstrates that although actions on the ground, supported by adequate financing, can protect and restore nature and the benefits it provides, on a European scale we are unequivocally falling short on all but one of the targets. The IPBES assessments on the state of biodiversity and ecosystems in the European region, published in 2018, confirms the dire state of biodiversity and ecosystems in the EU, as well as the consequences for the economy and society.

After the failure to meet the 2010 target and now the negative prognostics to meet the 2020 target, the European Commission, the research community and all societal actors cannot afford another failure. Lessons must be learned from previous failures.

We, ALTER-Net and EKLIPSE, see in the development of the EU post 2020 Biodiversity Strategy a unique opportunity to join forces and take advantage of their individual strengths to make a difference for biodiversity in Europe by engaging scientists, policy makers and society to 1) stimulate both the European Commission and the research community toward a robust and effective post-2020 EU Biodiversity Strategy and 2) develop an engagement strategy to create awareness and ownership from science, policy and society to implement it.

With this, together with you, ALTER-Net and EKLIPSE wish to significantly contribute to the development of the EU post 2020 Biodiversity Strategy and the success of its implementation.

The work started in an open Horizon Scanning workshop in Peyresq in September 2018. Here the process for collecting contributions and recommendations for the EU post 2020 Biodiversity Strategy was planned and initiated. To maximize this input, task forces have been set up and  a series of events and activities have been put into action (see also Fig 1).

The paper on societal key messages will focus on the process of collecting and encouraging dialogue on the key messages. It will also address ways of bridging gaps between the societal and science messages for societally relevant policy recommendations.

Join forces: As anyone, any projects, initiatives planning to contribute to the development of the EU post 2020 Biodiversity Strategy and the success of its implementation…

ALTER-Net and EKLIPSE are inviting the European community to raise interest in joining this movement, to send feedback on the framework for collaboration and to participate in the events and task forces mentioned above.

For more information on the whole process, please visit: 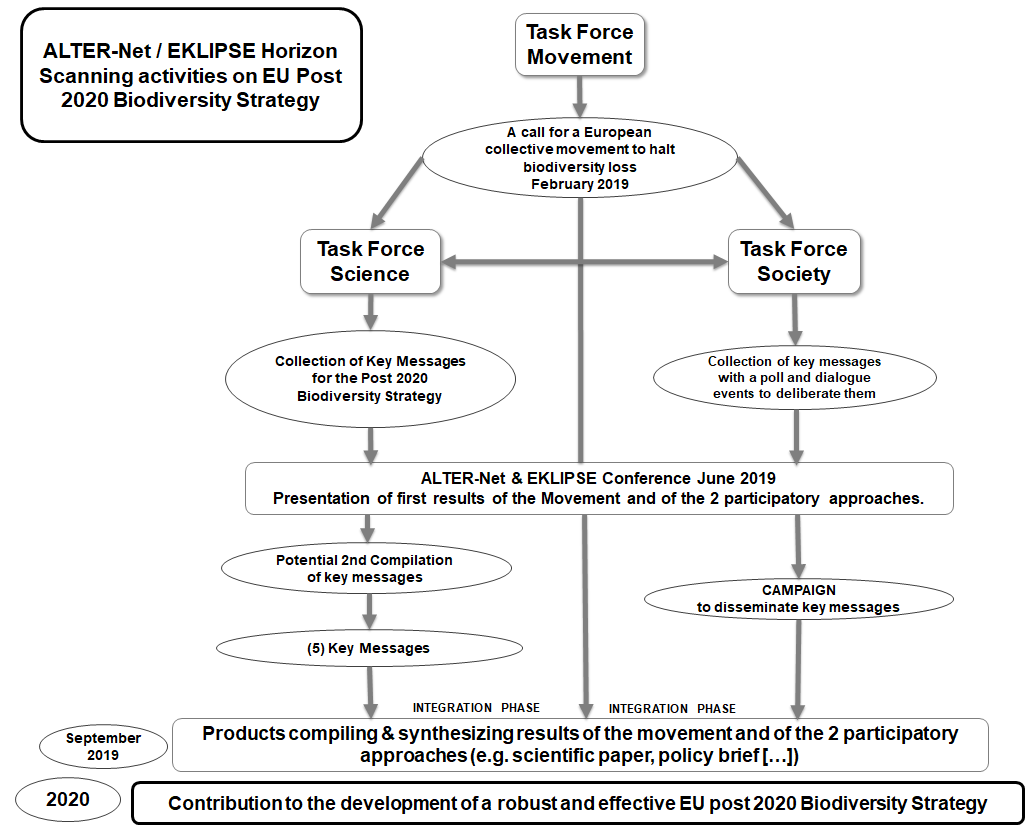